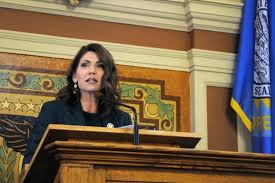 More than three dozen orphaned natural-gas wells are targeted for plugging under a plan from North Dakota Gov. Kristi Noem.

She included nearly $728,000 in her fiscal 2021 budget proposal offered this week to the North Dakota legislature. If legislators approve the budget, at least 40 abandoned wells will be plugged. The legislature goes into session Jan. 14, 2020 and will run through March at the state capitol in Pierre.

“It’s a priority for me,” she said according to the Rapid City Journal.

A Texas limited partnership named Spyglass Cedar Creek drilled the wells in 2006 near Buffalo. The wells fell idle by 2012 after the company suffered from falling natural gas prices, a lender’s bankruptcy, four lawsuits and a tax-fraud indictment against a business partner.

State laws required Spyglass to post $30,000 in bonds when the project began. The state Department of Environment and Natural Resources has since estimated the cost to plug the wells and reclaim the surface area around the wells will be $887,000.

Gov. Noem’s office indicated the remainder of the funding will be sought through legislation. As for Spyglass, the state government has assessed a $15.49 million penalty against the company and has brought a lawsuit to collect the money.