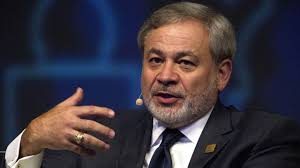 Oklahoma U.S. Sens. Jim Inhofe and James Lankford voted this week in support of the confirmation of Dan Brouillette to be the man replacing Rick Perry as Secretary of Energy.

The vote was 70-15 in favor of confirmation of Brouillette who is a former lobbyist for Ford Motor Company. He is President Trump’s second secretary of energy.

“I am proud that today the Senate confirmed Dan Brouillette to lead the Department of Energy,” Inhofe said.  “Brouillette has the experience and knowledge to ensure the DOE continues to prioritize the department’s primary goals of supporting vital national security programs and promoting energy independence.”

The Senator said Brouillette understands that the the U.S. cannot run the machine called America without “the responsible use of natural gas, oil, coal and nuclear resources.”

Brouillette had been Perry’s second-in-command at the Energy Department since 2017.