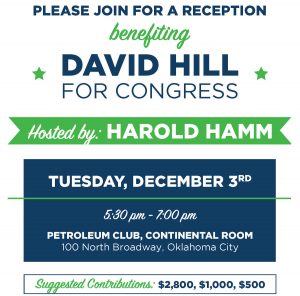 Oklahoma oilman and billionaire Harold Hamm has come out early in his support of one of the Republicans he hopes will unseat first-term Democratic Representative Kendra Horn.

Hamm sponsored a fundraiser scheduled for Tuesday in support of David Hill, the Edmond businessman who announced his candidacy in November for the 5th District U.S. House race.

Invitations to the event held at the Petroleum Club in Oklahoma City had suggested contributions of $2,800; $1,000 and $500.

Hill is owner and operator of MAR-K, a manufacturer of component parts for classic automobiles and trucks. He previously spent 28 years in leadership positions at Logic Energy Solutions, Petrosmith and Kimray Inc. 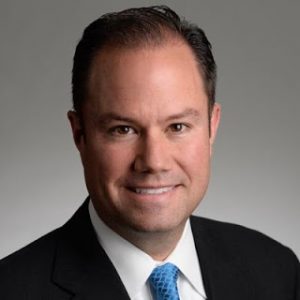 His website describes him as “a dedicated father, a successful businessman, and a conservative outsider who has never held public office.”

He also co-founded the Oklahoma City Memorial Marathon which is in its 20th year.

“David believes Congress is broken. Nancy Pelosi and the career politicians in Washington have taken us down the wrong path. They want socialized medicine, open borders, higher taxes, bigger government, and a complete elimination of our First and Second Amendment rights. They have launched a “Green New Deal” that threatens to shut down our energy industry and tank our entire economy,” he stated in his website.

“Now the politicians have made harassment, investigation, and impeachment of President Trump their top priority, ignoring American families struggling with sky-rocketing healthcare costs, facing an opioid epidemic that ravages our communities, and suffocating regulations that weigh down our economy, costing us jobs. It’s bad for Oklahoma, it’s bad for America, and it’s time to say enough is enough. David Hill won’t go along to get along. He’s not a career politician. He’s a fixer, a tough negotiator, and a leader. He’ll fight to fix Congress. He’ll answer to Oklahoma, and he’ll put an end to Nancy Pelosi’s crazy liberal experiment.”

Hamm is known for his support of Republican candidates and was an early supporter of Donald Trump in his campaign to win the White House. He appeared on stage with Trump as he campaigned in North Dakota where Hamm was an early developer of oil exploration in the Bakken shale play.