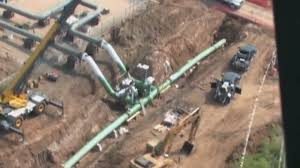 Canada’s TC Energy Corp reported it has recovered nearly half of the more than 9,000 barrels of oil from a pipeline leak in North Dakota.

An estimated 4,300 barrels were reported recovered after last week’s leak in Walsh County which is in the northeast part of the state.

“Preliminary work to expose and extract the damaged section of pipe has begun and is expected to be complete by the end of the week,” the company said in a statement, adding “about 200 round-the-clock personnel focused on clean-up and remediation activities,” stated the company in an update this week.

The 590,000-barrel-per-day Keystone pipeline was shut last week after a drop in pressure was detected and was estimated to have spilled more-than 9,000 barrels of oil. It was considered the second significant spill in two years along the line that carries Canadian tar sands oil through seven states including Oklahoma.