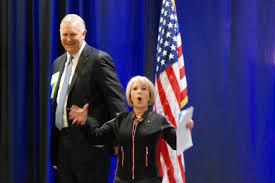 New Mexico’s Gov. Michelle Lujan Grisham says she wants to reach out to the oil and gas industry in creating new regulations for methane emissions.

She wants to take advantage of the knowledge that industry scientists have. The governor extended the offer as she spoke this week at the annual conference of the New Mexico Oil and Gas Association.

The governor said she wants her administration to work with the oil and gas association and to tap into the “brain power” of petroleum engineers and others in order to protect the environment.

“We are stronger working together,” she told the audience, also giving her thanks of appreciation for the huge oil revenue for the state—money used on education that might make college free in the state.

The governor said New Mexico is committed to an “all-of-the-above energy” strategy – a reference to her support for renewable energy.

She said she will push to regulate methane emissions – a component of natural gas often released in oil production and a contributor to climate change. But the governor told the audience it would be foolish to craft the rules without the input of the oil and gas industry.

“I have no doubt that New Mexico is going to get methane regulated right,” Lujan Grisham said.

The annual oil and gas conference comes as an oil boom in southeastern New Mexico helped propel the state budget to a record high of about $7 billion this year.

New Mexico is now the third-largest producer of oil in the United States, behind Texas and North Dakota.