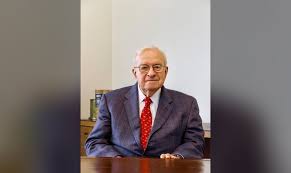 J.Hugh Roff, Jr., once the President, Chairman of the Board and CEO of United Energy Resources, Inc. died last week at the age of 88.

Roff died in Houston, Texas but was born in Wewoka, Oklahoma. A memorial service will be held Monday, Oct. 28 at the St Paul United Methodist church in Houston.