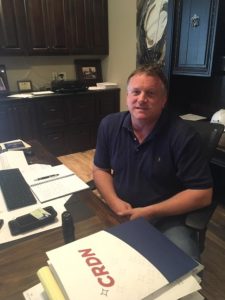 “What we do is fill technology holes that are left by the bigger companies.”

It’s what Bryce Conway, President of Flex-Chem in Oklahoma City says of his young company that is built on science.  After all, Conway, the south Texan who went to Southwestern State University in Weatherford, Oklahoma to become a pharmacist only to get a degree in chemistry proclaims, “Everything we do involves science.”

From downhole stimulation to the use of microbes to control wastewater pits, Flex-Chem has grown from the small company that Conway and Vice President Jeramey McClure started in 2002 in Conway’s garage to the 60 employees it now has. The employee list includes degreed chemists, petroleum engineers and a Ph. D microbiologist.

Microbes? They are used in recycling of wastewater in what Conway calls “mega facilities” where there are 3 to 4 different lagoons filled with up to 2.2 million barrels of wastewater.

Flex-Chem manages at least 7 of the “mega” facilities in Oklahoma. The company’s use of microbes allows the re-use of the wastewater, reduces costs for drilling companies and also lessens the environmental impact. Conway learned about the microbes when he spent a year as a contract researcher at the OU Health Sciences center.

“I started researching and found these microbe strains that grew on the thermal beds in the Atlantic ocean. These are the microbes that actually keep our ocean clean,” he explained.

Since the microbes exist in warm salt water, they also can be used in an oilfield environment.

“We did it for paraffin control and it was a success,” said Conway who co-founded the company when it was first called Microbial Energy Services. In 2007, the company’s name was changed. “When the shale booms started, we applied our technology to a different field which was frack water recycling. We found to recycle produced water, we could use these same species because it’s high salt concentration in this water.”

Flex-Chem’s first frackwater recycle facility was in Wheeler County, Texas in 2009. Since then, the company has focused on the Mid-Continent oil and gas region.

“Our technology allows the water to be cleaned and put back in the formation for frack.”

By using the microbes, the company is able to convert the wastewater from black to clean for re-use in the fracking of wells. 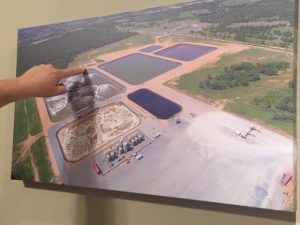 A picture on the wall of a company office displayed how the mega-facility of one Oklahoma company went from black water to clear water.

“What we do, we put our microbes into these pits and we consume…we starve out the bad bacteria.” The process not only changes the color of the water, but stops the emission of sulfur-like smells.

The microbes are grown at a minus 80 celcius submerged fermentation in the company’s laboratory in Weatherford.

But cleaning up frack water isn’t the company’s only focus. It also does stimulation of existing wells to improve production.

“It’s transforming the industry. We’ve been real successful all over the Mid-Continent area. We’ve got the technology that works,” said Conway. “We have a 90% successful rate meaning 9 out of 10 wells will stimulate and respond. Plus, we’ve never damaged a well.”

The company spent 3 and one-half years getting stimulation patents approved in 2019. Just as Conway sat down with OK Energy Today, his company two hours earlier had completed its first Permian Basin stimulation at a site about 70 miles east of Pecos, Texas where Flex-Chem has a field office.

While the company is just getting started with its stimulation in the Permian Basin, the prospect of using the technology in other oilfields is strong, based on scientific testing of the mineral makeup in other parts of the U.S.