DEQ board meets Tuesday in Ardmore 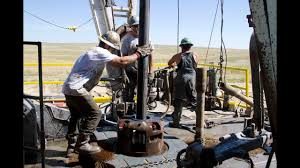 Oklahoma’s oil and gas industry continues its slide in oilfield drilling activity as the state dropped another 5 rigs to reach 75 this week compared to a week ago. A year ago, Oklahoma had 137 working oil and gas rigs but the drop in oil prices has taken its toll on oilfield activity.

Oklahoma’s count of 75 rigs compares to the 438 in Texas where this week’s number is down three from last week. Colorado remained at 27 while New Mexico stayed at 108. New Dakota added three to reach 54. Wyoming remained at 36 and Louisiana has 60 active rigs, same as last week.

The Red Top Rig Report published by the Independent Oil and Gas Service in Wichita reported the Kansas rig count is 29, a decline of one.

Seven rigs remain active in Oklahoma’s Woodford formations, same as last week. The Granite Wash remained at 3 rigs while the Mississippian count dropped one to reach two rigs. The D-J Basin in Colorado continued with 23 while the Permian Basin in Texas and New Mexico dropped by two to 427. The Williston in North Dakota added three rigs to reach 54.