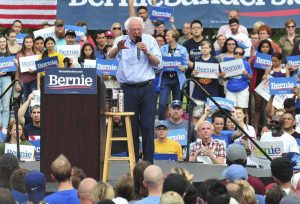 He chose to appear in Norman, home to the University of Oklahoma and perhaps the state’s largest population of Democratic liberal voters.

“We have a president who thinks climate change is a hoax,” he told the crowd of about 4,000.  “Well, I happen to believe that Donald Trump is a hoax. I think we actually need a president who believes in science.”

He went on to call President Trump a pathological liar and the most dangerous president in modern history.

Sanders appeared at a local park in Norman and spoke for nearly 40 minutes. He suggested that climate change is growing into a global crisis.

The Senator from Vermont also urged more support for his plan against fossil fuels, one that would pay workers and give them health benefits for up to five years after losing their oil and gas jobs.

Like Rep. Alexandria Ocasio-Cortez, he claimed the world has only 11 years to act to prevent major effects of climate change.

It was the first stop in Oklahoma for Sanders in his 2020 Presidential campaign.