Impact of BP’s move to bail out of Alaska

Congressman is educated on reclaimed mine land project 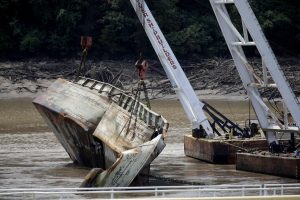 One of the two massive barges that broke free during the May floods of the Arkansas River and smashed into the Webbers Falls Lock and Dam was removed by workers on Tuesday.

The removal will allow crews to attempt a retrieval of the remaining barge that was sunken under it. Tug boats with winches were used in removing the barge that sank on May 23 as the Arkansas river flooded out of its banks.

The Tulsa World reported that officials originally anticipated removal to take weeks. But the paper said officials also did not expect to find serious damage to the Lock and Dam.

“The structure that was contacted was mostly concrete,” said Rodney Beard, chief of navigation for the Corps’ Tulsa District. “So there is some damage to the concrete. But, again, this project was designed to take that kind of impact.”

Beard said engineers will “drop the gates and go in there and inspect the structure while the water’s off of it. … That gives us a great opportunity to get in there and check the damage, check the concrete. Once we’re comfortable that everything is structurally sound and we don’t need to make any on-the-spot repairs, our next goal is to get the pool filled back up.

“So we’re looking at possibly filling the pool within five to seven days.”

Click here to view amazing pictures of the removal taken by the Tulsa World.