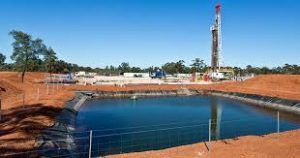 Texas and Oklahoma are seeking federal permission to regulate fracking wastewater under their own programs, raising concern among environmentalists who fear that oil and gas companies will eventually be allowed to discharge toxic chemicals into streams and rivers.

Bloomberg Environment reports the two states, both big oil and gas producers, are asking the Environmental Protection Agency to delegate authority to them to administer programs governing the discharge of wastewater from drilling.

The states say they can remove toxic chemicals and reuse or recycle the water, but environmental groups warn that the reuse and recycling technology touted by the states hasn’t been proven.

The states are looking to take advantage of an ongoing EPA evaluation of wastewater management practices, which includes the circumstances under which fracking waste may be discharged into rivers.

Fracking, or hydraulic fracturing, uses high pressure to inject a liquid mix into rock to drill for oil or gas.

Companies dispose of fracking waste by injecting it underground. That technique has caused problems in earthquake-prone Oklahoma, which has seen a decline in seismic activity since placing limits on wastewater disposal, according to the Petroleum Alliance of Oklahoma.

Officials from both states said they’re moving along with their plans.

Oklahoma first asked the EPA in December 2018 for permission to run its own program and regulate fracking wastewater as industrial water, said Erin Hatfield, a spokeswoman for the state Department of Environmental Quality.

The DEQ is working to resubmit its application, Hatfield said Aug. 14. “We do hope to get this completed rather soon.”

Industrial wastewater is allowed to be discharged, Hatfield said, provided it meets all effluent limitation guidelines established by EPA and all applicable water quality standards established by the Oklahoma Water Resources Board.

Wastewater from fracking “remains a huge issue for Oklahoma,” Kenneth Wagner, secretary of energy and environment for the state, said at a conference sponsored by the State Bar of Texas in early August. Reusing the water, he said, is an area of increasing focus.

Texas, meanwhile, is using a new state law, HB 2771, that gives officials until Sept. 1, 2020, to ask the EPA for permission to run their own permitting program, according to an analysis of the measure.

Oklahoma “is just a little ahead of us on this one,” Texas Commissioner on Environmental Quality Emily Lindley said at the conference.

Critics say the states, if given more authority, would likely move toward discharging wastewater into rivers and streams.

“There is no state or federal agency that is authorizing discharges of this type—meaning fracking wastewater discharges into state waterways—so it’s not as if we’re taking a federal program and delegating it to the state,” Shelley said.

Both states are counting on the EPA to loosen regulations on direct discharges of wastewater into rivers, a practice currently prohibited except under specific circumstances.

The federal agency is studying the issue, publishing in May a draft study evaluating oil and gas extraction wastewater management under the Clean Water Act after a public comment period.

An EPA official told Bloomberg Environment the agency plans to finalize the study and “announce any next steps later this year.”

Ken McQueen, the new head of the EPA’s south-central region, which includes Texas and Oklahoma, said recently that the expansion of states’ rights to issue permits for discharging pollutants into federal waterways “will be one of the forefront policy initiatives” for the agency.

Industry and state officials say fracking byproducts can safely be discharged into wastewater.

Moreover, delegating authority to the states “does not change the stringent requirements under the federal Clean Water Act and accompanying regulations associated with wastewater management,” Todd Staples, president of the Texas Oil and Gas Association, said in an e-mail.

“Bottom line is that we understand the discharges are not similar, but if you can clean water to discharge limits, then it shouldn’t matter if it is municipal waste, chicken waste, or produced water,” Chad Warmington, president of the Petroleum Alliance of Oklahoma, said in an e-mail. “I think we’re confident that if the data and the facts went out, it should be approved.”

But Johnson Bridgwater, director of the Sierra Club’s Oklahoma chapter, said techniques designed to remove toxic chemicals have not been able to remove “for certain the entire catalog of known toxic chemicals used in fracking and found in produced water, nor can they address the issue of radioactivity, a known problem related to produced water.”