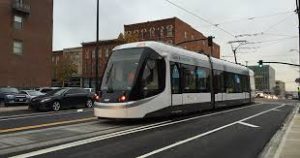 While Oklahoma City’s new street car system is up and running, the operation in Kansas City experienced a bump in the road over the delay of another of its cars.

The arrival of vehicle No. 806, the second of two new streetcars that will complete the six-car fleet on the 2.2 mile downtown line won’t arrive for another week. The Kansas City Business Journal reports the arrival date was pushed back because of a longer shipping time along its 700-mile route from Houston to Kansas City.

The cars were bought from Washington-based CAF USA Inc. for $11.9 million in 2016. Vehicle No. 805 arrived in May and hit the tracks in July, cutting passenger wait times by about one-third.

“People are riding the KC streetcar in record numbers. This past July, we saw the highest streetcar ridership to date, with more than 265,826 passenger trips, bringing our total ridership to over 7 million trips,” Tom Gerend, executive director of the Kansas City Streetcar Authority, said in a release. “The expansion of our fleet from four to six streetcars will support increased service frequencies and capacity in order to respond to the existing demand.”

No. 806 will undergo final assembly and shop testing for several days before it begins testing on the tracks at the end of August and will be ready for riders in early fall.

The 2.2-mile downtown line is the first step in a long-range plan to create an integrated transit system that will boost business and workforce development. The Streetcar Authority and the city have two extensions planned to the current line. The proposed Main Street extension would run from Union Station to the University of Missouri-Kansas City’s Volker Campus at 51st Street and Brookside Boulevard. A northern line would link the stop at Third Street and Grand Boulevard to the riverfront.