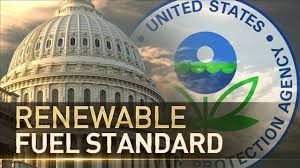 The issue of waivers granted 31 refiners from Renewable Fuel Standards is a hot one in Iowa where corn growers are upset over the Trump administration’s recent decision.

POLITICO’s Morning Energy Report explained how the EPA’s internal watchdog is being asked to determine how the agency decided to grant the vast majority of exemptions from the Renewable Fuel Standard that oil refiners have requested. EPA approved 31 petitions for waivers from the 2018 requirements, while rejecting just six, and corn-state lawmakers have howled at what they see as special favors for the oil industry.

Freshman Iowa Democratic Rep. Cindy Axne (D-Iowa) planned to call for an inspector general investigation into how EPA decided to expand the number of waivers it issued since Trump came into office. She will hold her press conference at Southwest Iowa Renewable Energy, an ethanol producer in Council Bluffs, Iowa, the same plant where Trump touted his action expanding sales of 15 percent ethanol.

Trump wants backsies: Trump is seeking to mollify corn farmers who are furious at the waivers, according to a Reuters report Tuesday. He personally approved EPA’s decision to go ahead with the 31 waivers earlier this month, but in a two-hour-long Cabinet meeting, Trump told his staff to figure out a way to pacify the farmers. According to a refinery industry source, the president asked EPA Administrator Andrew Wheeler if he could take the exemptions back and was told he could not.

EPA says no harm, no foul: Citing data from the Energy Information Administration, EPA said the U.S. had been setting records for both ethanol production and exports. “There is zero evidence that EPA’s congressionally mandated small refinery exemption program, which provides regulatory relief to small refineries around the country, has had any negative impact on domestic corn ethanol producers,” EPA spokesman Michael Abboud said in a statement. EPA says it follows a process prescribed by law in granting the waivers.

Nonetheless, POET, the largest U.S. ethanol producer, said Tuesday it idled an Indiana plant due to the waivers. “Our industry invested billions of dollars based on the belief that oil could not restrict access to the market and EPA would stand behind the intent of the Renewable Fuel Standard,” POET CEO Jeff Broin said in a statement. “Unfortunately, the oil industry is manipulating the EPA and is now using the RFS to destroy demand for biofuels.”