With operations in 90 countries and offices in Oklahoma City, the company has been saddled with a heavy debt load and years of losses. At one time, the company was valued at more than $50 billion but it never recovered from the oil price collapse in 2014.

In announcing the move to bankruptcy court, Weatherford management said they hope to reduce long-term debt by more than $5.8 billion through restructuring.

Weatherford’s shares plunged 61% to 14 cents in extended trading on Friday after the company reported the plan to seek protection from creditors and a wider quarterly loss. 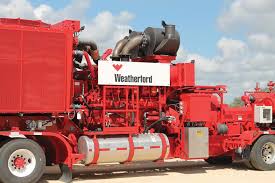 Weatherford provides oil-and-gas well construction and completion, drilling and evaluation, and production services. It had about 26,000 employees at the end of March.

Weatherford reported total liabilities of $10.6 billion and assets of $6.52 billion on March 31. It has not reported a quarterly profit in four years.