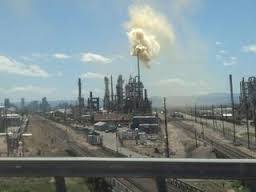 Colorado officials admit they have not taken action against Suncor Energy’s oil refinery north of Denver even though the operation broke a 12.8 ton limit for one invisible toxic gas last summer.

The Denver Post reports officials now are considering possible action because the refinery estimated in July 2018 that hydrogen-cyanide emissions were at a level of 14.1 tons a year.

Now state officials are weighing a request from Suncor — Colorado’s only refinery and one of the state’s largest polluters — to raise its hydrogen-cyanide permit limit upward to 19.9 tons a year, giving the fossil fuels refinery a greater buffer.

The state health department and the Environmental Protection Agency say Suncor’s current permitted level of hydrogen-cyanide emissions is safe, though no direct measuring or exposure studies have been done. 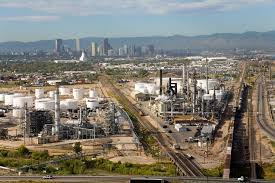 And critics, including U.S. Rep. Diana DeGette, contend the Colorado health department’s handling of hydrogen cyanide shows a regulatory approach focused on individual pollutants that, when no federal regulations apply, lets companies dictate how much they should be permitted to pollute.

Hydrogen cyanide, a byproduct of processing crude oil at the nation’s 135 refineries, can be deadly. It’s a colorless gas that smells faintly of almonds. In concentrated form, it’s what the Nazis used to exterminate prisoners in their death camps during World War II, and it’s been used in death-penalty executions in the United States.

Exposure at high levels leads to rapid breathing followed by convulsions, loss of consciousness and death, according to the EPA. Low-level exposure causes trouble breathing, chest pain, vomiting, headaches and enlargement of the thyroid gland.

A review by The Denver Post of state and federal data determined the refinery also releases 886,000 tons of heat-trapping greenhouse gasesannually, along with 24 tons of sulfur dioxide, 12.5 tons of hydrogen sulfide, 25 tons of ozone-forming volatile organic compounds, 4 tons of carbon monoxide, 49 tons of nitrogen oxide and 55 tons of particulates.

Some of these are regulated or limited through permits. Some are not. Hydrogen cyanide, along with cancer-causing benzene and hydrogen sulfide, rank among the most potentially harmful.

Suncor refinery operators declined to discuss in detail the pollution from their facility, one of 65 refineries in the nation that process more than 100,000 barrels a year of crude oil.