Congressman makes case for expanded broadband service in his district

Standing up for Oklahoma’s oil and gas industry 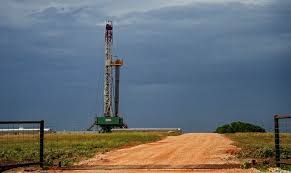 While Oklahoma held steady in the number of oil and gas rigs active in the state, the national count continued its downward plunge.

Oklahoma remained at 103 in the past week, unchanged from a week ago. But nationally, the count fell by 4 to 983 which puts it 76 less than last year when there were 1,059 active rigs.

In the past week, the national slide has included five oil rigs putting the count this week at 797, The number of gas rigs slipped by 12 to 186.

The count in Oklahoma compares to Texas where the count is 481, down one from a week ago according to Baker Hughes Co. Colorado’s count fell by two to 31. In Kansas, the count is 26, or one less than last week according to the Red Top Rig Report published by the Independent Oil and Gas Service.

Louisiana stayed at 63 while New Mexico dropped by four to 99. North Dakota added one to reach 57 while the count in Wyoming fell by one to 32.

Of the oil plays, the count continued at 8 in the Woodfords of Oklahoma. The Granite Wash remained at 7 while the Mississippian dropped two to four. The Eagle Ford saw the addition of one to reach 75 while the Permian Basin count dropped three to 451. The Williston grew by one to 57.