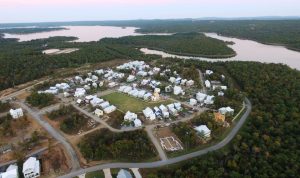 The newly created town called Carlton Landing near Lake Eufaula has run into environmental issues with the State and now the U.S. Army Corps of Engineers.

The Corps has stopped building projects on public land at the town because the town’s water district pumped millions of gallons of water from its sewage lagoons onto Corp land and into Lake Eufaula.

The Oklahoma Department of Environmental Quality also issued a second order in less than a month against the town for pumping tens of thousands of gallons of water the sewage lagoons using an unpermitted system to discharge the water.

DEQ records, according to an investigation by The Frontier, showed the runoff flowed into Lake Eufaula.

The DEQ investigation led to a $33,750 fine against Carlton Landing for the alleged installation and use of the unpermitted land application system. In March, the DEQ found that more than 34,000 gallons of water from the sewage lagoons had been pumped onto nearby land and it flowed into the lake.

The incident occurred four days after the town’s water district had been put under a DEQ consent order.

An investigation by The Frontier late last month found that the town’s water district and administrators had been warned for years by Oklahoma Department of Environmental Quality inspectors to make repairs and improvements to its sewage lagoon and wastewater system. Rainwater was collecting in the system and causing the town’s three sewage lagoons to fill rapidly, and in some cases overflow, DEQ records show. The town’s three cell total retention sewage lagoons are located a few hundred feet uphill from Lake Eufaula, and next to the 420 acres leased from the U.S. Army Corps of Engineers.

On Monday, DEQ issued a permit variance allowing Carlton Landing to land-apply the wastewater from its sewage lagoons in a location about a mile west of the lagoon system.

The town’s founder and developer Grant Humphreys told The Frontier that the town’s water district is working to build a new wastewater treatment plant, but is waiting on DEQ approval of the system.