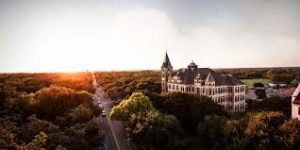 The University of Virginia might be number one in college basketball, but the honors for renewable energy efforts go to a school in Texas.

A new ranking of U.S. colleges and universities that have shifted to renewable energy resources shows Southwestern Texas University in Georgetown is number one for the most renewable electricity. Southwestern is the state’s oldest university and has an undergraduate enrollment of more than 1,500 students.

The ranking comes from the Environment America Research and Policy Center which featured at least 19 states and Washington, D.C. in the lists. The rankings are basked on college and university reports to the Association for the Advancement of Sustainability in Higher Education’s Sustainability tracking, Assessment and Ratings System.

No Oklahoma colleges or universities made the list. However, the University of Central Oklahoma in Edmond is one of 44 colleges and schools taking part in the U.S. EPA Green Power Partnership where 100 percent of electricity comes from renewable sources.