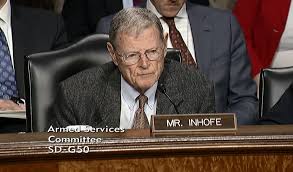 Oklahoma U.S. Sen. Jim Inhofe is trying to get legislation to stop what he calls “activist” states from abusing the Clean Water Act in blocking some energy projects such as gas lines in the Northeast.

He and Sen. John Barasso of Wyoming, chairman of the Senate Committee on Environment and Public Works have introduced an amendment to the Clean Act. It would clarify some aspects of the existing law and put guardrails in place and requirements on states as they process requests for certification.

The Senator says it’s all in the name of preventing  future abuses.

“When the United States leads the world in producing natural gas but states in the Northeast have to import Russian LNG, you know there is something wrong,” he said in announcing the legislation.

“For decades states have routinely certified pipeline and other infrastructure projects under the Clean Water act without cause for concern, but lately we’ve seen the unfortunate trend of activist state governments blocking projects they deem politically unsavory.”

The Senator pointed to a minority of states he accused of abusing the water quality certification process to block railroad, pipelines and hydropower projects, “for reasons that have nothing to do with water quality to delay needed interstate infrastructure projects at the expense of their neighbors.”

His Water Quality Certification Improvement Act of 2019 would amend section 401 of the Clean Water Act.

·         Clarify that the scope of a section 401 review is limited to water quality impacts only;

·         Clarify that states, when evaluating water quality, can only consider discharges that would result from the federally permitted or licensed activity itself – not from other sources;

·         Require states to make final decisions on whether to grant or deny a request in writing based only on water quality reasons; and

·         Require states to inform a project applicant within 90 days whether the states have all of the materials needed to process a certification request.

Representative David McKinley (R-WV-01) will be introducing the companion bill in the House of Representatives.