He didn’t get his hands dirty but Vice President Mike Pence visited an oil rig Wednesday during a fund-raising stop in Midland, Texas. He not only raised money for President Trump’s reelection effort but complimented local oil and gas workers.

“All of you prove every day what hard work and ingenuity and American commitment to developing our resources can mean to the life of this country,” he said as a crowd cheered in approval.

The visit in Midland gave him a chance to inspect a Diamondback Energy rig where he spoke to supporters.

Pence praised the exploration and production in the Permian Basin, noting it is one of the world’s top oil exporters. He also highlighted efforts of the Trump administration to help the oil and gas industry.

“We approved the Keystone and Dakota pipeline. We rolled back the hydraulic fracking rule, the methane rule, stream buffer rule, the clean power plant and we got America out of the disastrous job-killing Paris Climate Accord. We’re putting American energy first.”

The Vice President vowed that the Trump administration will keep working and pushing for trade opportunities that will help the industry. 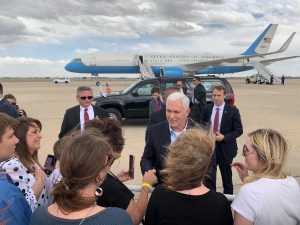 Pence is the first President or vice president since George W. Bush to visit Midland since the 1970s when President Gerald Ford helped open the Permian Basin Petroleum Museum.

Later on Wednesday, the Vice President attended a fund-raising dinner where guests had to pay $2,800 a person. Those who wanted to attend a VIP reception had to come up with a $50,000 donation. And just to have your picture taken with the Vice President cost $15,000.