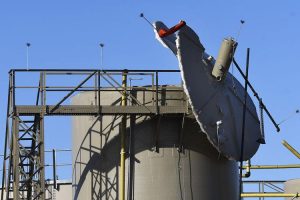 From the Enid News and Eagle

Authorities have released the identities of a man killed and another injured in a saltwater disposal site blast Monday night southwest of Enid.

The deceased is Javier Varraza, a 32-year-old Hispanic male, said Eddie Johnson, family assistance coordinator with the Office of the Chief Medical Examiner. He said blunt force head trauma was the cause of death, which was ruled an accident.

Helm said both men are from out of state.

“A crew was working on the top of a tank with a propane torch and a man lift, which caused an explosion,” Helm said.

The acting sheriff said the lease owner was Lagoon water services, which subcontracted to Jennings Energy, which employed the injured workers. All investigations have been turned over the Oklahoma Corporation Commission and other state agencies who deal with oilfield and safety incidents.

The OCC does not have jurisdiction over worker safety at oil sites, and any environmental impact from the explosion was confined within the site’s berm, said spokesman Matt Skinner.

“Our jurisdiction is environmental,” Skinner said.