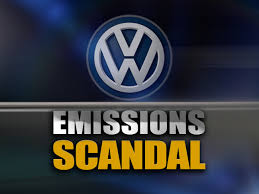 Even after agreeing to pay $8.5 million to Oklahoma and millions to other states over its emissions scandal, Volkswagen finds itself being sued by the U.S. Securities and Exchange Commission.

The SEC contends Volkswagen AG and its former CEO Martin Winterkorn defrauded U.S. investors by raising billions of dollars through bonds while failing to disclose that its “clean diesel” vehicles failed to meet U.S. emissions standards. The government in its lawsuit alleges a “massive fraud.”

The SEC said in its civil complaint that from April 2014 to May 2015, VW issued more than $13 billion in bonds and asset-backed securities in U.S. markets at a time when senior executives knew that more than 500,000 U.S. diesel vehicles grossly exceeded legal vehicle emissions limits.

VW “reaped hundreds of millions of dollars in benefit by issuing the securities at more attractive rates for the company,” the SEC said, adding it “repeatedly lied to and misled United States investors, consumers, and regulators as part of an illegal scheme to sell its purportedly ‘clean diesel’ cars and billions of dollars of corporate bonds and other securities in the United States.”

The suit filed in San Francisco seeks to bar Winterkorn from serving as an officer or director of a public U.S. company and recover “ill-gotten gains” along with civil penalties and interest.

Winterkorn, who resigned days after the scandal became public in September 2015, was charged by U.S. prosecutors in 2018 and accused of conspiring to cover up the German automaker’s diesel emissions cheating.

VW said in a statement the SEC complaint “is legally and factually flawed, and Volkswagen will contest it vigorously. The SEC has brought an unprecedented complaint over securities sold only to sophisticated investors who were not harmed and received all payments of interest and principal in full and on time.”

The automaker added that the SEC “does not charge that any person involved in the bond issuance knew that Volkswagen diesel vehicles did not comply with U.S. emissions rules when these securities were sold” but repeats claims about Winterkorn “who played no part in the sales”.

German markets regulator Bafin could not be reached for comment about whether it was working with the SEC.

VW has spent billions to pay claims from United States-based VW owners, environmental regulators, states and dealers, and has offered to buy back about 500,000 polluting U.S. vehicles. That figure included $4.3 billion in U.S. criminal and civil fines.

But the SEC said VW “has never repaid the hundreds of millions of dollars in benefit it fraudulently obtained.”

VW admitted to secretly installing software in 500,000 U.S. vehicles to cheat government exhaust emissions tests and pleaded guilty in 2017 to felony charges. 13 people have been charged in the United States, including Winterkorn and four Audi managers.