Why 11 states do not have wind powered electrical farms 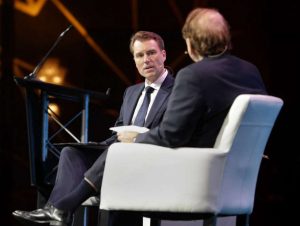 With Schlumberger indicating it anticipates investments in North American oilfields to be down this year as international markets grow, there’s no specifics as to how it might affect the company’s operations in Oklahoma.

Kibsgaard said revenue in Schlumberger’s international markets such as Africa, Asia and Latin America are expected to grow, but other factors are affecting the firm’s North America activity.

“Higher cost of capital, lower borrowing capacity and investors looking for capital discipline and increased returns suggest that future E&P investments will likely be at levels dictated by free cash flow,” Kibsgaard said. “Based on this, we expect E&P investment to be down more than 10 percent in 2019 versus 2018.”

In addition to lower investments in North America, Kibsgaard said Schlumberger anticipates more  technical challenges from issues such as how drilling more than one well on a same lease impacts production according to the Houston Chronicle.

And with more drilling expected to take place outside Tier 1 acreage, Kibsgaard anticipates hitting a plateau on previous trends such as drilling longer laterals on horizontal wells and proppant use per stage.

“All these factors point to a more moderate production growth from U.S. shale in the coming years,” Kibsgaard said. “This means that investments on the international markets will need to increase further for the industry to meet the growth in global demand. This normalization of the global E&P spend is good news for Schlumberger, as our earnings power in the international markets is highly differentiated.”

Founded in 1926 and headquartered in Paris, Schlumberger has its U.S. headquarters in Houston. The company finished 2018 with a $2.2 billion profit on $32.8 billion of revenue.