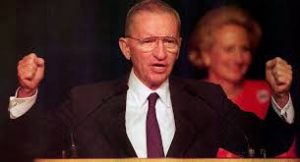 A new man’s in charge of the Ross Perot fortune in Dallas. The Wall Street Journal reported this week that the Dallas’ billionaire Perot family hired veteran hedge fund trader Boaz Sidikaro to be the new investment chief.

The 44-year old Sidikaro took over after being a part of the Perot Investments since March. He worked at New York hedge fund Och-Ziff Capital Management Group for more than 20 years.

Sidikaro will take over for the family’s longtime investment officer Steve Blasnik, who held the position for more than 30 years. Blasnik told The Journal he was stepping back from daily investment operations after having held onto a “lot of responsibility” for three decades. Blasnik said he will continue to advise Sidikaro.

Och-Ziff Capital Management Group, where Sidikaro was one of the earliest employees, has been beset with controversy for some time over an alleged bribery scheme and other investment troubles. A former European executive with the company was recently indicted on fraud charges.

The Perot family is famous for building technology companies that were later sold to General Motors and Dell and for real estate development in Texas and elsewhere. In Forbes’ richest Americans ranking in October, Ross Perot Sr. had an estimated net worth of $4.2 billion while Ross Perot Jr.’s fortune totaled $2.3 billion.

The Perot family’s investments have shaped the face of North Texas over the last several decades. The family started the Legacy business park in Plano years ago with the establishment of its company Electronic Data Systems, and the name continues to hold weight for businesses operating in the area. The family moved its business operations to a new site on Turtle Creek in 2017.