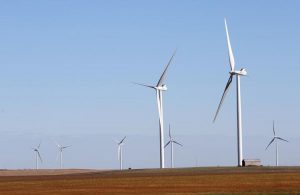 When temperatures plunged to nearly zero in Oklahoma in the past several weeks, it was much colder in the upper Midwest. So cold, it stopped wind farm operations in North Dakota.

Here’s how the Bismarck Tribune reported the story.

On any given day, the blades of 100 wind turbines that wrap around the central North Dakota town of Courtenay rotate softly over the prairie, generating enough energy to power 105,000 homes.

But when temperatures dropped below negative 20 degrees on Jan. 29, the white towers automatically came to a standstill and ceased to produce electricity. Until the air warmed up beyond that threshold, the turbines remained dormant.

Wind turbines here and elsewhere have software that senses when the air temperature drops below minus 20 and forces them to shut down, said Mark Nisbet of Xcel Energy, which owns the wind farm. It’s an industry standard to protect turbines from damage during extremely cold weather.

Turbines across North Dakota shut down at times in the last week of January due to some of the coldest temperatures the area had seen since the mid-1990s. Wind power levels dropped significantly, more than experts anticipated.

Sen. Kevin Cramer, R-N.D., and others seized on the midwinter lapse in wind power to criticize the Green New Deal, a policy proposal to reduce carbon emissions and address climate change. Cramer called the proposal “a fantasy.”

“What it did in my mind is it exposed a real vulnerability that we’ve often talked about over the years … of intermittent electric generation,” he said of the turbines shutting down.

Despite the recent outage, wind energy experts say turbines rarely shut down in North Dakota, so rarely that it doesn’t affect the overall bottom line. It wouldn’t be economically feasible to develop turbines to handle lower temperatures, said Brian Draxten, manager of resource planning for Otter Tail Power Co., a utility based in Fergus Falls, Minn., that draws wind energy in North Dakota.

“The additional costs you have to incur for the very few times probably wouldn’t make it worth it,” he said.

Draxten said turbines have trouble operating below minus 20, much like a vehicle when fluids don’t stay warm enough to move through an engine properly. The systems use some energy to keep oil and components heated so they can start up again, he said.