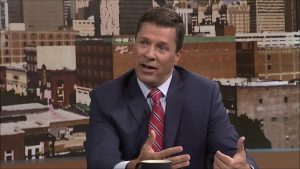 Oklahoma Gov. Kevin Stitt’s state of the state address on Monday received support from the newly-formed OIPA-OKOGA, the group created by the 2018 merger of the Oklahoma Independent Petroleum Association and the Oklahoma Oil and Gas Association.

“The governor’s call for clear rules, common-sense regulations, and a competitive tax code will allow our industry and all of Oklahoma’s economy to flourish. We are committed to working with the governor in whatever capacity we can to move the state forward,” said Chad Warmington, president of the OIPA-OKOGA.

Gov. Stitt’s call to expand the state’s savings account is the kind of visionary thinking that will let Oklahoma weather the boom-and-bust cycles that have been exacerbated by multiple tax hikes over the past few years, which further increased the state’s dependence on our industry.

“We hope that the governor and legislature will be ever mindful that none of their goals, however worthy, will be attainable without a thriving oil and natural gas industry in Oklahoma,” he added.

About OIPA-OKOGA: OIPA-OKOGA, the newly formed oil and natural gas trade association created by the merger of the Oklahoma Independent Petroleum Association and the Oklahoma Oil & Gas Association, is the only trade association in Oklahoma that represents every segment of the oil and natural gas industry, allowing the industry to speak with one voice when advocating for the interests of our members, landowner partners, host communities and employees. The association’s goal is to enhance Oklahoma’s economy for future generations and be a destination for capital investment from the upstream, midstream and downstream segments of the energy industry.