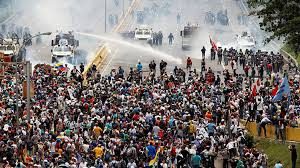 Oil prices rose on Friday because of the turmoil in Venezuela where there were more violent street protests over the government’s leadership of Nicolas Maduro and attempts by opposition leader Juan Guaido to take over as President.

Prices rose as concerns did too about the increased chances of a tighter global supply if the U.S. were to follow through with threatened sanctions on Venezuelan exports.

Brent crude oil futures were at $61.17 a barrel at one point which is 8 cents higher. U.S. West Texas Intermediate crude futures were up 21 cents reaching $53.34 a barrel.

“The oil market is partially pricing in the risk to Venezuela’s crude production, which has been plummeting in recent years,” Vandana Hari of Vanda Insights said.

RBC Europe predicted that sanctions could nearly double projected output shortfalls from the troubled exporter according to Reuters.

“Venezuelan production will decline by an additional 300,000-500,000 barrels per day (bpd) this year but such punitive measures could expand that outage by several hundred thousand barrels.”

Global oil markets are still well supplied, however, thanks in part to surging output in the United States.

Record U.S. production would likely offset any short-term disruptions to Venezuelan supply due to possible U.S. sanctions, Britain’s Barclays said in a note. The bank cut its 2019 average Brent forecast to $70 a barrel, from $72 previously.