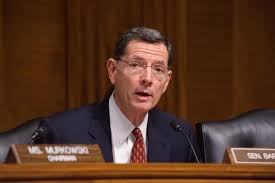 Wyoming U.S. Sen. John Barrasso is trying again to get support for a bill to grant authority to states to oversee oil and gas projects on federal lands.

The “Opportunities for the Nation and States to Harness Onshore Resources for Energy Act would allow states to apply to the Interior secretary for exclusive authority to issue and enforce drilling plans and applications for permits to drill on the federal land within their borders.

In addition, oil and gas drilling projects on private and state lands would be exempt from federal permitting and environmental review if the federal government owned less than 50 percent of the subsurface mineral interests, according to the bill text.

States and tribes would also have “primacy” to regulate hydraulic fracturing within their borders, it says.

The goal, according to a summary of the bill from Barrasso’s office, is to reduce delays in permitting projects and “promote energy development by reducing regulatory costs and uncertainty.”

Barrasso said in a statement that such regulatory burdens “have bogged down the federal oil and gas permitting process.”

“States like Wyoming have shown they are ready and able to effectively manage responsible oil and gas development on federal land,” he said. “Our legislation gives states the power to do just that while also eliminating punishing and unnecessary regulations.”

“Proposing to give states control of public lands that belong to all Americans and eliminate protections for health, safety, and the environment is as extreme as it gets,” said Drew McConville, the Wilderness Society’s senior managing director for government relations, in an emailed statement.