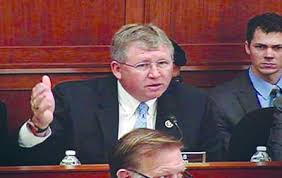 The transfer of power from Republicans to Democrats in the U.S. House has resulted in longtime Oklahoma congressman Frank Lucas being left off the House Agriculture Committee.

It is a committee that he once chaired and helped win approval for farm bills in past administrations.  But Lucas, in an interview with Ron Hays at the Oklahoma Farm Report suggested he’s taking one for the team—-the Republican party.

“Agriculture is my first and foremost concern. It is my livelihood back home. It is the one industry that is everywhere in the 3rd District. I’ll be there for the Farm Bill. It’s just right now—sometimes to have to help the team,” said Lucas.

However, as a result of the shuffling of players, Rep. Lucas will become the ranking Republican on the House Science, Space and Technology Committee.

” I’m looking forward to those responsibilities, a brand-new area,” he remarked, “but ever mindful of the core industries in my district and in my state.”

As a result of his leadership on the Science committee, Lucas will play a role in supporting the newly-returned efforts of NASA to return to the moon and continue explorations beyond. But there will also be funding aspects for weather satellites, the National Science Foundation and the National Weather Service and its laboratories at the University of Oklahoma.

You can listen to the Ron Hays interview of Rep. Lucas by going to the Oklahoma Farm Report.