Highway projects delayed in Oklahoma due to government shutdown 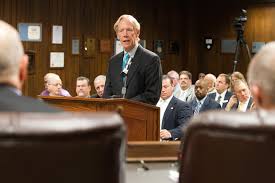 The head of the Oklahoma Department of Transportation warned this week that if the partial government shutdown continues much longer, some summer time highway construction projects will be missed by contractors.

Executive Director Mike Patterson issued the warning at the State Transportation Commission’s monthly meeting where he said 45 upcoming projects totaling more than $137 million are being delayed from the Commission’s January and February bid lettings due to the lack of federal funding authorization.

These include highway, county road and city street projects using federal funds. Projects that are already under contract are not affected because funds were already authorized before the contracts were awarded.

“While we’re very grateful that the Highway Trust Fund remains available to pay for the federal share of projects already under construction, the inability to award new contracts with federal funds could delay some projects from starting for several months.” Patterson said. “If this budget impasse continues, contractors could miss out on some of this year’s prime construction season in the spring and summer.”

The commission and department accepted awards from the American Concrete Pavement Association honoring two projects administered by ODOT in 2017.

A more than $7 million project to reconstruct the intersection of SH-51 (Sixth St.) and US-177 (Perkins Rd.) in Stillwater earned a gold award in the State Roads category at both the national and state levels. The project was administered by the ODOT Stillwater Residency. A $2 million project to reconstruct more than three miles of County Road EW-73 near Dover in Kingfisher County overseen by ODOT’s Perry Residency earned a gold award at the state level and silver at the national level in the County Roads category.

These four rail crossings are located in a primarily residential area and currently have no gate arms. The funding approved by the commission will allow installation of new flashing signals with gate arms as well as some crossing surface improvements.