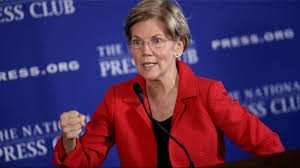 Anne Reid was a top Democratic staffer on the U.S. House Energy and Commerce Committee where Oklahoma Rep. Markwayne Mullin is a member.

Environmentalists see it as a move by Warren to boost her green credentials in a possible bid to run for President.

The staff shakeup, which was first reported by The Boston Globe, comes as Warren mulls a presidential bid in 2020.

While Warren has a strong record of advocating for consumer protection and Wall Street remains one of her favorite political punching bags, environmentalists say her record on climate change leaves something to be desired.

Though Warren boasts a 99 percent lifetime score from the League of Conservation Voters, she has said little publicly about climate change.

“Elizabeth Warren does not have a record of advocacy and leadership on climate change issues,” said Jack Clarke, director of public policy and government policy at Mass Audubon.

A graduate of Harvard University, Reid previously served as a legislative assistant to Sen. Chris Coons (D-Del.), among other staffing roles on Capitol Hill, according to her LinkedIn profile.

Reid, who is African-American, will become one of the few people of color to lead a Senate office in the new Congress. Chiefs of staff play a key behind-the-scenes role in resolving disputes and ironing out policy issues.