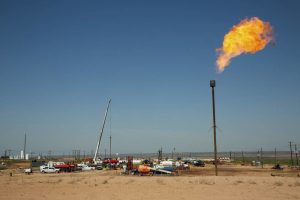 Not everyone’s happy with the Permian Basin boom that extends into southeastern New Mexico. Some of the ranchers who lease federal government land are complaining how the oil and gas firms are taking up space and grazing land.

The ranchers are also encountering more violations from oil spills to haphazard land restoration. Plus, they’re learning the Bureau of Land Management doesn’t have the resources to make sure the rules are enforced according to a report by the Santa Fe New Mexican newspaper.

One of the complaining ranchers is near Carlsbad.

Wayne Smith was hardened to a certain level of chaos here, on land the American public owns. But even he was incredulous as he surveyed an area he leases for grazing, now cleared of grass and cluttered with aboveground pipelines, a drill pad for multiple wells and other oil and gas infrastructure.

“I still pay a grazing lease right there,” Smith said in May, pointing to a government map showing there should be no more than 17 acres of development on the site instead of the 125 acres he saw in front of him. “Now, what’s my cow going to eat?”

This isn’t what’s supposed to happen on publicly owned land the federal government oversees. The Bureau of Land Management can lease the same property to more than one party at once, but if New Mexico ranchers request it — as Smith did — the agency has instructed its field offices to contact them before such a buildup occurs. Smith said no one notified him. The BLM declined to comment on the matter.

Violations, from oil spills to haphazard land restoration, are becoming more common in this hotbed of oil and gas activity, according to ranchers and conservation groups. One sign of the area’s increasing appeal for drilling: A September federal oil and gas lease sale brought in a record-breaking $972 million.

A local BLM official, Jim Stovall, has admitted his team doesn’t have the resources to enforce all the rules on the books, according to people who heard his remarks.

Fixing these problems isn’t the Trump administration’s priority. Instead, it’s working to speed up oil and gas permitting and open tens of thousands of additional acres to drilling here. For years, the industry in New Mexico has had outsize access to local BLM officials — federal employees relying on the private sector for everything from money to expertise. Now, it’s getting assistance from Washington.

“We want to make the BLM a better business partner for the oil and gas industry,” Michael Nedd, then-acting director of the agency, said last year at the Carlsbad Mayor’s Energy Summit.

Conservationists, ranchers and others worry that allowing more drilling without addressing the problems already created by ramped-up production could threaten one of the most biologically diverse deserts in the world and scar the land so it can’t be used for other purposes afterward. As the Trump administration calls for “energy dominance,” some here fear their way of life will become collateral damage.

This conflict is happening against a backdrop of record U.S. production of oil and gas, juiced by demand from international markets that federal rule changes opened up to American firms earlier in the decade. Much of what’s being sent abroad comes from the Permian Basin, a geological formation in West Texas and southeastern New Mexico that includes about 2 million acres of land and 3 million acres of minerals such as oil and gas managed by the BLM around Carlsbad.

In New Mexico, production is occurring ever closer to Carlsbad Caverns National Park, a United Nations World Heritage Site with more than 119 caves and 33,000 acres of desert wilderness, threatening air quality and the habitats of endangered birds.

Industry and government officials say accelerating permitting will bring much-needed jobs and money to the area. New Mexico is heavily dependent on oil and gas revenue, and the permitting process, some say, has been hijacked by anti-development interests.

“Texas was blessed, not just with a larger portion of the basin, but also with no federal lands,” Ken McQueen, Cabinet secretary of the Energy, Minerals and Natural Resources Department of New Mexico, told members of Congress in June. “In Texas you can have a permit and a rig on location quicker than you can fill out the paperwork to drill a well on federal acreage in New Mexico.”

But people are using that land for other purposes, too. The Smiths, for instance, have ranched here for generations. They own property, but leasing public land is a key part of their cattle operation, which is true of many ranchers. Before Wayne Smith died in October at age 47, he kept calling the BLM for help.