Executives say pipelines aren’t the only constraints in the Permian 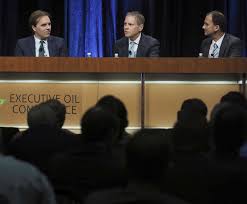 It’s not just a lack of pipelines that is a major issue for explorers in the Permian Basin of West Texas and New Mexico.  Drillers like Devon Energy of Oklahoma City and Laredo Petroleum of tulsa are facing other constraints, according to panelists who spoke at a recent Executive Oil Conference presented by Hart Energy in Midland, Texas.

Panelists said other potential constraints include water-handling issues, export capacity and regulatory constraints according to a report in the Midland Reporter-Telegram.

Asked if the pipeline constraints had impacted activity, Steve Pruett, president and chief executive officer of Elevation Resources, cited a blowout in price differentials between West Texas Intermediate sold at Midland and at Cushing.

“While rig efficiencies created production increases, there’s been a buildup in DUCs – drilled, uncompleted wells,” he said. “Public companies spent or overspent their guidance and were punished by investors.”

A focus on capital discipline was their message combined with that wide price differential impacted activity, he said.

But, he said, “it’s a pause” and his company is already seeing a tightening in availability for frac crews.

Carrie Endorf, vice president, reservoir engineering and planning for Parsley Energy, agreed that any slowdown in activity will be until budgets are refreshed in 2019.

Added Pruett, “All the operators I’ve talked to, none have had any curtailments. The speculation is the Midland-Cushing differential, in January 2020 when pipeline capacity is seen as exceeding demand, will be zero. The markets are driving this, which is disconcerting to operators like myself.”

Reed Olmstead, director, North American onshore research and business development with IHS Markit, said he sees a lot of uncertainty around what oil prices could be, largely because of politics.

“No one expected immediate sanctions on Iran,” he said.

He said his company is looking at $63 to $65 WTI prices, but the uncertainty around a base case for prices makes planning difficult.

“The refiners are buying all they can process. Domestic refiners are not configured to process lighter crudes,” he said. “That means we have to sell it. We have to more than double exports from 2.2 million barrels a day to 4.8 million barrels a day, primarily on boats, in order to meet the expected production outlook. It’s possible but we’re pushing the bottleneck downstream. We need to dredge the channels, add terminals.”

Joel Fry, principal with Tailwater Capital, raised concerns about the amount of water being produced in the Permian.

“Producers need to be thoughtful about putting systems in place to handle production,” Fry said. He mentioned Pioneer Natural Resources’ 40-well pad, which could produce as much as 100,000 barrels of produced water.