Transportation commissioners told to be ready for driverless cars 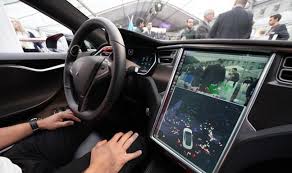 But he told the Oklahoma Transportation Commission this week they are in the near future and the state’s Driving Oklahoma Working Group is a partnership exploring policies and safety of those vehicles.

“As we look to the future on what to expect and what we need to change, we want to be ready for whatever is coming in the autonomous vehicle arena—that would be state statutes, municipal ordinances and the like,” said Patterson at the commission meeting.

The commission was briefed on how nearly $3.9 million has been handed out to rural Oklahoma transit agencies to purchase new or replacement vans, minivans and buses.

The Commission voted to award a $780,000 project to construct nearly two miles of sidewalks at various location in Yukon, including along Route 66; a $1.86 million project to reconstruct the US-270 bridge over US-270B in north Shawnee and a nearly $14 million highway reconstruction and bridge replacement on US-64 near Cleveland in Pawnee County.