Coyle shaken again by another earthquake 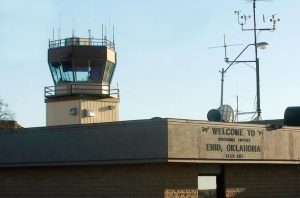 Work started this week on a nearly $3 million new terminal at Enid’s Woodring Regional Airport, one to be used by energy leaders as they fly in and out of the region.

Workers started demolition of the old parking lot where the new $2.75 million terminal will be constructed by RSM Development Inc. of Edmond.

“The big thing we did at the airport was create a temporary parking area. We carved out a portion of the terminal apron that we normally park our aircraft on, about 150 feet by 150 feet, and we actually had it striped by the city and we put barriers all around it, so if you drive in there you won’t be able to drive out onto the actual parking apron where there’s aircraft at,” Airport Director Dan Ohnesorge told the Enid News and Eagle.

During construction, the current terminal, including both the restaurant and business section, will remain open with the only difference being visitors having to enter from the south side as opposed to the north side, Ohnesorge said. Construction signs that “can’t be missed” are put up to help direct traffic to the new parking area. 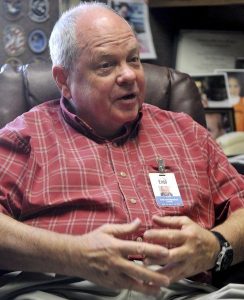 Woodring’s new terminal is expected to be complete by about June 2019.

Ohnesorge said, depending on the finish date, the old terminal would close after business hours on a Friday after construction is completed and the move-in to the new terminal will be conducted over the weekend with the new terminal opening on a Monday.

“We will have a new and more efficient terminal. We’ve had issues with the plumbing and electrics (in the current one), and then we’ve also had issues with sizes of rooms and locations of rooms, and access,” Ohnesorge said.

The new terminal is set to have a number of familiar features in addition to numerous new components. It’ll have a restaurant side and a business side put together with an interior centerpiece/lobby area that will be open 24 hours.

Ohnesorge said the central area open 24 hours will have vending machines, bathrooms and a waiting area.

“In conjunction with Vance, we want to make a joint-use planning room, we’ll have a couple debriefing areas and then computers, printers and things pilots need these days to plan their missions out,” Ohnesorge said.