As Hurricane Florence takes aim on North Carolina, it’s a reminder that the nation’s Strategic Petroleum Reserve was once used following the 2005 Hurricane Katrina.

This week, the Department of Energy announced it exercised its option to extend a $2 billion contract for a Texas firm to manage the Reserve which consists of oil stored in massive underground caverns in Texas and Louisiana.

The contract with Fluor Corporation of Dallas will be extended through March of 2024. Fluor Federal Petroleum Operations, LLC, a wholly-owned subsidiary of Fluor will book the contract extension value in the third quarter of 2018. 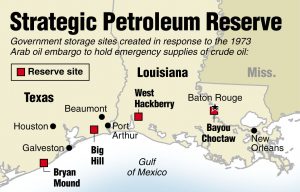 Fluor has managed the strategic reserve since April of 2014.

“We are pleased that the Department of Energy has confidence in our performance and ability to deliver on the important work that is underway on the SPR,” said Tom D’Agostino, president of Fluor’s Government Group. “Fluor has a strong legacy supporting our country’s national security objectives and has a history as a prime contractor committed to our DOE customer.”

The SPR is the world’s largest supply of emergency crude oil. The federally owned oil stocks are stored in underground salt caverns in Louisiana and Texas. Decisions to withdraw crude oil from the SPR are made by the President of the United States. In an energy emergency, SPR oil would be distributed by competitive sale. The SPR has been used in these circumstances three times: in 1991 during Operation Desert Storm, in 2005 after Hurricane Katrina, and in 2011 as part of an International Energy Agency coordinated release to offset crude oil supply disruptions due to Middle East unrest.

The SPR has conducted non-emergency sales of oil to respond to lesser supply disruptions or to raise revenues. Most recently in 2017 and 2018, the SPR conducted congressionally mandated oil sales to raise revenue for the U.S. Treasury and to fund the SPR modernization program, respectively.