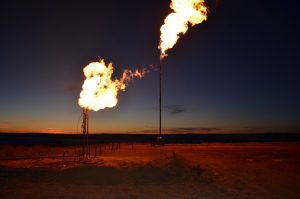 A rollback of Obama-era restrictions on methane gas flaring by energy companies in Oklahoma and other oil and gas producing states will reportedly be announced this week by the Trump administration.

It will be at least the third major step to roll back federal efforts to fight climate change.

The New York Times reports the Environmental Protection Agency could announce this week a plan to weaken the Obama-era requirement that companies monitor and repair methane leaks. The newspaper made the report based on documents it was able to review.

The Interior Department is also expected to release soon its final version of a draft rule that would repeal a restriction on intentional venting and flaring of methane from drilling operations.

Officials from the E.P.A., the Interior Department and the White House did not respond to emails and telephone calls seeking comment.

Industry groups praised the expected changes. “It’s a neat pair” of proposals on methane, said Kathleen Sgamma, president of the Western Energy Alliance, an association of independent oil and gas companies that is based in Denver. The Obama-era E.P.A. methane rule, she said, “was the definition of red tape. It was a record-keeping nightmare that was technically impossible to execute in the field.”