Chesapeake plans to sell $1 billion in notes to raise money 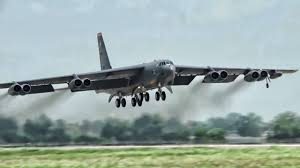 Oklahoma could gain financially if Wichita, Kansas based Spirit AeroSystems, the successor to Boeing Wichita succeeds in winning a B-52 maintenance contract.

It could mean additional work for the AeroSystems operations at Tinker Air Force base in Oklahoma City and perhaps impact manufacturing facilities in McAlester and Tulsa.

As the Wichita Eagle reported many of the B-52s, 76 out of the original 744 Boeinng  Stratofortresses produced were manufactured in Wichita.

“At the height of the Cold War, the Air Force amassed a fleet of 744 Boeing B-52 Stratofortresses, each capable of delivering 70,000 pounds of bombs, including nuclear ones, thousands of miles from the U.S.

In fact, 76 of the 102 B-52H models that remain in the Air Force’s inventory were produced on South Oliver in Plant 2, where Spirit now assembles nearly three-quarters of the Boeing 737 commercial airliner. 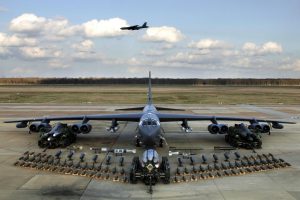 Now, the Air Force wants to extend the life of the B-52s that remain in its fleet to at least 2050. That means replacing each bomber’s eight original Pratt & Whitney jet engines.

Spirit AeroSystems, created from the 2005 sale of Boeing’s Wichita Division, would like to get some of that work. Company officials hope Wichita’s history building the B-52 — and the fact that some of Spirit’s 12,500 active employees worked on the plane under Boeing — will be a strength in competing for the engine work.

“It’s really key to have experience under your belt, plus bring folks in who have experience,” said Krisstie Kondrotis, Spirit’s senior vice president for defense programs and business development. “We have those people.”

Earlier this year the Air Force decided to move ahead with a plan to put new engines on a plane that is more than 56 years old.

The Air Force said in February that the decision to keep the B-52 flying was based on numerous factors, including cost, supply and the airplane’s capability to carry out long-range bombing missions.

“With an adequate sustainment and modernization focus, including new engines, the B-52 has a projected service life through 2050, remaining a key part of the bomber enterprise well into the future,” Gen. Robin Rand, commander of the Air Force’s Global Strike Command, said in February.

The B-52 is a unique airplane among modern, jet-powered aircraft because of its eight engines. Despite the move by commercial airlines away from four-engine aircraft to more fuel-efficient two-engine aircraft, the Air Force has opted to retain all eight engines in the replacement effort. 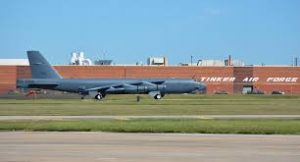 James Kroening, Boeing’s B-52 program manager in Oklahoma City, said a four-engine B-52 was proposed as early as 1969 and numerous times since then.

There were numerous instances “over time that showed some risks of aircraft control under certain situations … that sticking with eight engines avoids,” said Kroening, who once worked at Boeing Wichita.

When the Air Force decided to put new engines on the B-52, “they just set a ground rule to stick with eight (engines),” he said. “That’s how we got here today.”

Boeing was named by the Air Force as the integrator of the B-52 “re-engine” program.

Broadly, that means it’s Boeing’s responsibility to see that the work is done and by whom, except for selecting the engine manufacturer. That will be done by the Air Force, Kroening said.

“There will certainly be some degree of customization required for the B-52 ,” said Oathout, also a Boeing Wichita veteran. But “the desire is to have them remain as close to a commercial engine as they can.” That will keep costs lower than if the Air Force required manufacturers to develop an entirely new engine, he added.

Manufacturers likely to compete for providing the engines are Pratt & Whitney, GE and Rolls-Royce.

Rolls’ BR725 engine is one of the B-52’s proposed replacement engines. With that engine, Spirit already has expertise in designing, building and integrating the nacelle and thrust reverser for the Gulfstream G650 long-range business jet, Kondrotis said.

“It’s a good demonstration of our ability,” she said.

Kondrotis thinks the opportunity for Spirit on the B-52 work could involve the design, manufacture and integration of the struts and nacelles for the new engines.

And in that arena, Spirit’s expertise is wide.

“When you look at our experience, especially with Boeing platforms, the fact is those (engine structures and housings) have to be integrated with whatever engine” is used, she said. For instance, Boeing’s commercial airliners use a variety of engines made by CFM International and GE. Spirit manufactures the struts, nacelles, or both for the Boeing 737, 747, 767, 777, 777X and the Airbus A220 passenger jets (which is powered by Pratt & Whitney’s Geared Turbofan engine).

Kondrotis said Spirit is interested in working on the B-52 because it’s another piece of defense work.

“The fact is that this is a key program to growing that defense portfolio for us,” she said.

Kondrotis added that it still has some in-house expertise when it comes to the B-52H, as some Boeing Wichita employees joined Spirit after the division’s sale 13 years ago.

“There’s a lot of folks still employed here who have experience on the platform,” she said, including assembly and modification of the plane, who “can really add value to what we bring to the plate.”

But there’s a lot that has to happen before Spirit can even begin to think of working on the B-52.

Namely, Boeing has to decide if it will do things like manufacture the struts and nacelles, or select a supplier such as Spirit to do the work.

Boeing officials said they’re not there yet.

The company still has to receive its first of many contracts to begin the process of putting new engines on the B-52.

The first contract, which Kroening said “we are actually on the verge of being awarded,” will cover the first phase of the project, which focuses on “a lot of the engineering analysis of what are the Air Force requirements, and how does that translate into the re-engine requirements themselves.”

Then the Air Force has to select an engine provider, and Boeing has to decide what work it will keep for itself and what it will contract out to suppliers.

“I can just tell you those decisions have not been made, and we are in the midst of working through them,” Kroening said.

Spirit’s Kondrotis is hopeful that Spirit, with its ties to Boeing and legacy in assembling and modifying the B-52, will see some of that work return to Wichita.