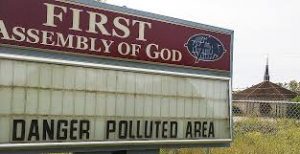 A Tulsa federal judge has granted a protective order for Kinder Morgan in a 3-year old lawsuit filed over an abandoned former oil refinery in Bristow.

Kinder Morgan sought protection claiming that one of the attorneys for the Lees had a conflict of interest because he had previously represented a Kinder Morgan subsidiary, El Paso Corporation regarding the former refinery site.  The attorney eventually withdrew from the case but Kinder Morgan still sought a protective order which was granted.

However, Judge Kern denied the company’s request to stay continuing discovery in the lawsuit.

The Bristow First Assembly of God also filed suit against the companies over the abandoned refinery. Contamination forced the church to move to a new location when the old refinery was put on an EPA Superfund site list.

Earlier this year, a judge ruled against the church in a Freedom of Information Act fight over the refinery, as OK Energy Today reported.