It’s not exactly a bridge to nowhere 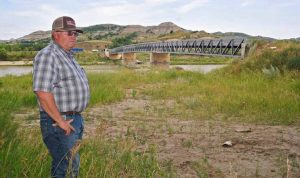 Some red faces no doubt exist at at least one or maybe two federal agencies after they learned a North Dakota rancher wrongly was allowed to build a bridge over the Little Missouri River. The problem with rancher Wylie Bice’s bridge northwest of Killdeer?  One end sits on public land. The other sits on his land.

But in the rancher’s defense, he followed the book and sought and won a permit from the U.S. Army Corps of Engineers in 2013 and built the bridge.  Bice thought he owned the property on both sides of the river according to the Bismarck Tribune.  And the Bureau of Land Management didn’t learn of the bridge until a year ago so now it is assessing the situation.

Its options are to remove the bridge, sell the agency’s land or authorizing the bridge.

“It’s a difficult situation due to the fact that it’s a high-quality bridge and one end of it is on public land,” said Loren Wickstrom, manager of the BLM North Dakota Field Office. “We’ll just have to wait and see after we do the environmental assessment which is the preferred alternative.”

An unpaved access road, a water settling pond and portions of two alfalfa fields also are on public lands without permission, the agency said. Nearly 13 acres of public land are affected overall.

Wickstrom said Bice has been cooperative in the process. Bice will pay for the environmental assessment and will also be charged back rent.

Bice said he built the bridge to connect to his ranching operation and picked the location to avoid removing too many trees.

“It was the best place to put it without doing a bunch of damage,” Bice said.

Bice said he wants to work with the agency. He said he is investigating whether the bureau changed the boundary of the land within the last 50 years.