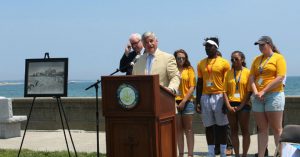 Oil companies with big ties to Oklahoma have been sued by the state of Rhode Island and accused of causing climate change.

“Rhode Island is especially vulnerable to the effects of climate changes that is now on our doorstep with sea level rise and an increase in severe weather patterns, as seen by the extensive damage caused by storms in the past several years, including Super Storm Sandy and the floods of 2010,” Kilmartin said in a statement.

“The defendants’ actions for the past several decades are already having and will continue to have a significant and detrimental impact on our infrastructure, economy, public health, and our eco-systems, and will force the state to divert already-limited resources to mitigate the effects of climate change, thereby diminishing resources for other vital programs and services.”

Kilmartin’s lawsuit is the first time a state has sued fossil fuel companies and held them responsible for climate change. His lawsuit comes a week after a California federal judge dismissed similar lawsuits filed against oil companies by the cities of San Francisco and Oakland.

The National Association of Manufacturers responded to the Rhode Island lawsuit and said it too should be tossed out of court.

“Taxpayer resources should not be used for baseless lawsuits that are designed to enrich trial lawyers and grab headlines for politicians. This abuse of our legal system does nothing to advance meaningful solutions, which manufacturers are focused on every day.”