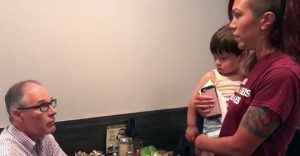 EPA Chief Scott Pruitt’s the latest member of the Trump administration to be verbally attacked while out in the public. It was  this week at a Washington D.C. restaurant where a woman confronted him and called on him to resign.

Kristin Mink put her encounter with Pruitt on her Facebook page saying he “was 3 tables away as I ate lunch with my child. I had to say something.”

So she confronted him.

“This man is directly and significantly harming my child’s—and every child’s—health and future with decisions to roll back environmental regulations for the benefit of big corporations, while he uses taxpayer money to fund a lavish lifestyle.”

Her video has more than 100,000 hits, showing her walking up to Pruitt, the former Oklahoma Attorney General.

“I just wanted to urge you to resign because of what you’re doing to the environment and our country,” she said while holding her toddler., “We deserve to have somebody at the EPA who actually does protect our environment, somebody who believes in climate change and takes it seriously for the benefit of all of us, including our children.”

She appeared to be reading from notes as she kept glancing at a piece of paper.

“I would urge you to resign before your scandals push you out.”

Pruitt was seated at the time and did not respond to the woman. She later said on her Facebook page that he “fled the restaurant before I got back to my seat.”

Pruitt is the third member of the Trump team to be verbally harassed while in public. The attacks came after California Rep. Maxine Waters urged people to “show up wherever we have to show up” to protest Trump’s policies.

“If you see anybody from that cabinet in a restaurant, in a department store, at a gasoline station, you get out and you create a crowd and you push back on them, and you tell them they’re not welcome anymore, anywhere,” said Waters.