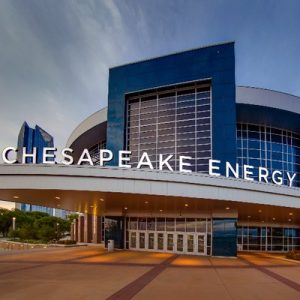 The Oklahoma City convention center that carries the name of Chesapeake Energy is getting a new general manager.

Chris Semrau was announced this week as the new man in charge of the Chesapeake Energy Arena and Cox Convention Center.

“We are very excited to have Chris join our SMG team in Oklahoma City,” said Doug Thornton, SMG’s Executive Vice
President of Stadiums and Arenas. “He is an accomplished arena manager who has deep experience and relationships
in our industry. He will be a great addition to our operation there.”
Semrau was most recently the Assistant General Manager of the Denny Sanford PREMIER Center in Sioux Falls, SD. He
relocated to Sioux Falls in 2014 to open the new facility and oversaw all PREMIER Center arena business operations
relating to booking, marketing, sales, event services, media relations and premium seating. During his tenure, the
PREMIER Center was a finalist for an Academy of Country Music Awards for Venue of the Year (medium capacity)
three times (2016, 2017, 2018), Pollstar’s Best New Concert Venue Finalist (2015) and Semrau was a finalist for Venue
Executive of the Year (2016) by the International Entertainment Buyers Association (IEBA). Venue’s Today Magazine also
selected Semrau four-times as a finalist for Booking Achievement (2014, 2015, 2016, 2017)
Before opening the PREMIER Center, Semrau was part of the senior management team which opened and managed the
Ralph Engelstad Arena in Grand Forks, ND. Semrau attended the University of North Dakota and received his Bachelor of
Arts degree in Marketing. 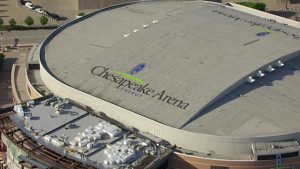 “The City of Oklahoma City welcomes Chris Semrau as General Manager for the SMG-managed Chesapeake Energy
Arena and Cox Convention Center” added Thomas Anderson, the Executive Manager of Special Projects for Oklahoma
City. “As a highly respected professional, Chris displays a strong skill set as a leader and documented success in
progressively raising the bar in securing A-list concert artists and other events. He has a track record of community
involvement and I have no doubt he will seek not only the best for these City-owned facilities and their guests, but also
in ways to help Oklahoma City address challenges and continue its successes for the betterment of our community.
Oklahoma City is fortunate to have him.”
“Chris Semrau brings tremendous experience, vision and energy to the position of general manager of Chesapeake
Arena,” said Danny Barth, Executive Vice President and Chief Administrative Officer of the Oklahoma City Thunder. “On
behalf of our ownership group and entire organization, we congratulate Chris and look forward to welcoming him to the
SMG and Thunder family. Together, we will continue to make our facility among the very best in the nation.”
Chesapeake Energy Arena is Oklahoma’s premier arena and destination for the best in sports and entertainment.
Whether it’s the action of an NBA basketball game, or the excitement of a live concert or world-class event, more than
one million guests create memories each year at Chesapeake Energy Arena. Home of the NBA’s Oklahoma City Thunder,
Chesapeake Energy Arena is conveniently located in downtown Oklahoma City, which continues to rank among the

strongest-performing metro areas. Cox Convention Center is one of the most centrally located venues of its kind in the

nation. The SMG-managed facility offers more than 100,000 square feet of exhibit space, a 25,000-square-foot ballroom,
21 meeting rooms and a 15,000-seat arena, all just steps away from an ever-increasing number of downtown hotels and
a vibrant entertainment district featuring a variety of canal-side restaurants, clubs, music venues and attractions.