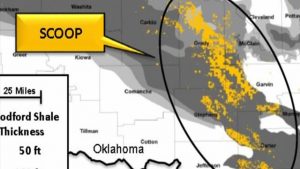 The largest well of those filed in the latest completion reports for Oklahoma produced more than 1,300 barrels a day for Oklahoma City-based Devon Energy.

It was a continuation of the Sonoyta wells in Blaine County, one of the active counties that make up the STACK. The Sonoyta 23_26-17N-10W 3HX was spudded in October of last year and drilling finished in November. Completion was made in February 2018 with production of 1,337 barrels of oil a day. The well (23 17N 10W) is located about 6 miles southeast of Hitchcock.

More wells have been produced in Kingfisher county over the past few weeks. Nine in all including four by Newfield Exploration and four by Gastar Exploration of Houston, Texas.