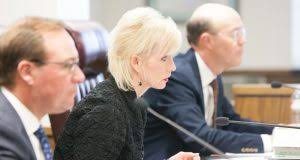 After waiting for a recommendation from an Administrative Law Judge, the Oklahoma Corporation Commission will meet Tuesday to formally adopt a $64 million rate reduction agreement with Oklahoma Gas and Electric Company.

The ALJ recommended last Friday that the state move ahead with the agreement reached by Attorney General Mike Hunter.  Commissioners had hoped to have voted last Friday after the recommendation but the issue was put on Tuesday’s agenda.

The agreement means a reduction in utility bills for OGE customers beginning in July. In addition to a one-time refund because of an $18.5 million federal corporate income tax cut for the utility, customers will see an average reduction of $19 on their July bills. Afterward, the average cut in bills will be $4.44.

The rate reduction agreement made by OGE is a result of the company’s investment in the Mustang Energy Center.  OGE spent nearly $400 million on transforming the center into a state-of-the-art complex that now includes seven new environmentally compatible natural gas turbines. The lower amount comes on the heels of an average $13.34 per month fuel cost reduction in March 2018.

“We’re pleased the various parties led by the Oklahoma Corporation Commission staff recognize through this agreement the real value and strategic importance of the Mustang Energy Center to our customers, communities and state in the decades ahead,” said OG&E spokesman Brian Alford. “It is important to note the agreement also supports regional energy grid reliability and resiliency while ensuring Oklahoma customers receive the benefit of tax savings that resulted from the Tax Cuts and Jobs Act of 2017.”

Alford added that both the Southwest Power Pool, which oversees the bulk electric grid and wholesale power market in the central United States, and the Arkansas Public Service Commission deemed the Mustang project to be in the public interest.

The Corporation Commission meeting will begin at 9:30 a.m. in the Jim Thorpe building.