Intel Boasts of Growing Solar Power at its campuses 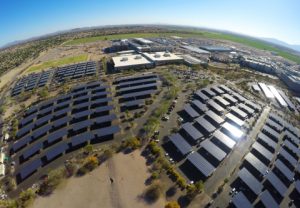 While solar power development is only in occasional use in Oklahoma, it’s growing in some states to the southwest. Intel reports it now has enough solar panels to cover 52 regulation football fields or 47 full-size soccer fields.

In a recent announcement, Intel estimated it has installed 3 million square feet of solar arrays at Intel sites in nine nations. The panels harvest 33 million kilowatt hours of green power which is equivalent to the annual energy use of 3,700 U.S. homes.

Intel uses energy from the sun to heat and cool its buildings across its campuses in the U.S., Europe and Asia. The panels also provide lighting and produce electricity for on-campus use.

Intel boasts that 100 percent of the energy it uses in its chip manufacturing business in the U.S. and Europe come from renewable sources: solar, hydro and wind.