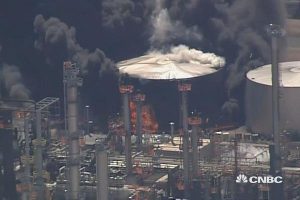 A refinery tank explosion on Thursday in  Wisconsin left eleven workers injured. It happened at the Husky Energy refinery in Superior, Wisconsin.

Fire Chief Steve Panger said at last word, there were no known fatalities when a tank containing crude oil or asphalt exploded.

The blast happened in the morning and the workers were in the process of shutting down the plant for repairs. A contractor inside the building said the blast sounded like a “sonic boom”