Invenergy Pulls Out of Wind Coalition Over Allegations Made by Legislator 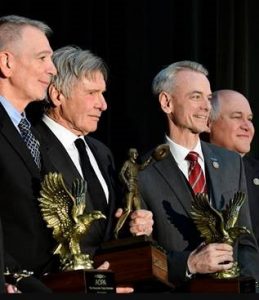 Saying airspace in the U.S. belongs to “we the people”, Oklahoma congressman Steve Russell reports a victory in the fight against those who wanted to privatize the FAA’s Air Traffic Control System.

He made the announcement this week in a newsletter to constituents.

After leading a long and hard-fought battle against proposed privatization of our air traffic control, I am pleased to report that the advocates of the deeply flawed 21st Century AIRR Act have finally given up their push for legislation that would have put the security of our skies in jeopardy. This has not been a partisan issue, but a national security issue, and I am proud to have played a bipartisan part in defeating this dangerous proposal.

On March 21, I was honored to receive the Joseph B. “Doc” Hartranft Jr. Award from the Aircraft Owners and Pilots Association (AOPA) in a ceremony at Ronald Reagan Washington National Airport in DC. Named for AOPA’s first president, this award is meant to recognize lawmakers and individuals who have contributed to the aviation community. Another award recipient was Rep. Dr. Ralph Abraham (R-LA), my friend and battle buddy in the fight to keep our skies free and secure. I was humbled to be honored along with renowned actor Harrison Ford, himself a pilot and general aviation advocate, as he received the AOPA’s Hoover Trophy at the ceremony for his tireless work with youth and national aviation issues.

Airspace belongs to ‘We, the People’- it doesn’t belong to anybody else. I will continue to stand in steadfast opposition to any proposed privatization of the Federal Aviation Administration’s air traffic control system. The impact that privatization would have on our national security, as well as general aviation, cannot be overstated. While I am supportive of modernizing our aviation and airspace infrastructure, it is very important that we do not relinquish control of our national air space.