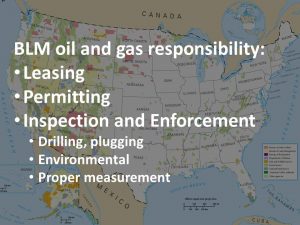 The controversial issue of drilling permits for federal lands is getting the attention of members of the House Committee on Natural Resources.
Two top Democrats, Rep. Raul Grijalva of Arizona and Rep. Alan Lowenthal of California have asked the Government Accountability Office to examine how many federal on shore oil and gas drilling permits were used by the BLM created reforms last year.
While no Oklahomans are on the House committee, several from oil and gas producing states in the region are members including Texas Rep. Louie Gohmert, Colorado Rep. Doug Lamborn and Rep. Steve Pearce of New Mexico. Arkansas Rep. Bruce Westerman also sits on the committee. All four are Republicans.
The Democrats want to know more about the concerns raised by the Bureau of Land Management regarding the backlog of applications.

“At the same time, however, reports in the press indicate that oil and gas companies have nearly 8,000 unused approved drilling permits, and BLM consistently approves more drilling permits than companies approved in a given year,” the lawmakers said. The agency approved 2,846 drilling permit applications in fiscal 2017 while producers started 1,424 wells, they noted.

To help the committee in particular—and Congress in general—evaluate resources BLM commits to processing drilling permit applications, Grijalva asked for a GAO investigation of determine:

“As BLM attempts to efficiently process drilling permit applications, it must focus on [those] that industry is most likely to drill,” Grijalva and Lowenthal said. “Otherwise, BLM staff would be expending limited resources to process permits that industry is unlikely to use.”