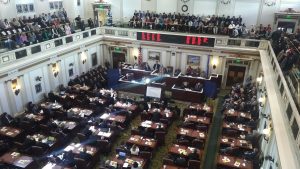 After this week’s failure to win approval of its tax hike plans in the Oklahoma House of Representatives, the group Step Up Oklahoma apparently is taking a wait and see approach.

“For now, the group is taking a break and waiting to see what alternative plan (if any) comes out of the State Capital,” said one member of the group of civic and business leaders.

But one candidate for governor, Republican Gary Richardson is applauding and thanking the legislators who stood their ground and defeated the tax-hike proposals.

“Thank you to the conservative lawmakers who held fast against tremendous pressure, followed their conscious (sic) and voted against this tremendous tax hike,” said Richardson in a released statement. “This truly demonstrates how SQ 640, requiring a 75% majority for tax hikes, is working exactly as it was designed.”

Richardson went on to say that increasing taxes is difficult and should be.

“Oklahoma voters know this “Step Up” scheme would do nothing to solve the systemic problems that allowed this crisis to occur in the first place,” added the GOP hopeful. “With no oversight or accountability of agency spending, it is increasingly clear to everyone, Oklahoma does not have a revenue problem—Oklahoma has a spending problem.”

Richardson said legislators can not morally justify a $700 million tax increase “when it is abundantly obvious they are mismanaging the money they already have.”